Here is one REAL case from Mitch:

...... I got my clip-chip yesterday, however, after proper installation following the guide/diagram on wii-clip.com for a D2C Wii, my Wii Drive does not work even through the chip's green LED turns on. The drive does work when I remove the Wii-clip. From the official Wii-clip website, I believe I may have a fake/defective wii-clip v5 and/or wasabi v2 as the one you sent me matches up perfectly to the fake wii-clip. Online forums have also confirmed my suspicions. I would like to ask for a full refund plus shipping charges pending the return unless there is something else we can work out. Thanks. ......

...... I recieved the clip-chip on Monday July 21. I realized it was a fake from wii-clip.com and the clip has more pins than what was needed. I was upset that the clip damaged pins on my wii . ....... This is just bad pratice on their part, or a seller trying to make a quick buck. I just wanted to make sure wii-clip is notified of this situation.  Thanks.......

......yes i do. you can see the two pins that were damaged and one of the resistors, i believe, fell out from me trying to fit the fake V5 wiiclip on. the pins inside the wiiclip did not fit correctly with my wii's chip and only after I realized it was fake did I know why I was not able to put it on correctly. It fits now that the pins inside the fake wiiclip are loose. Sorry the picture is 2MB, but I wanted to send the original. Thanks ......

Here is one REAL case from Kal:

......I bought a pre-soldered d2pro9 v2 and wii clip and installed it. It worked great for the first few days but now the drive is dead. I opened it back up, reseated the chip and no difference. I'm getting a back and forth flashing of red LED and blue LED. With the Wii-Clip removed the drive is still dead. I have noticed that the Wii-Clip may have damaged the d2c chip legs as three of the legs are clearly dented. Is this a known problem? ...... 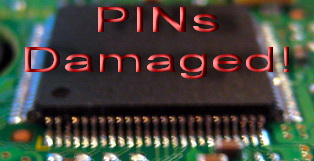 ...... I attached two photos that are as clear as I could get. One is of the soldered d2pro9 v2 chip onto the clone Wii-clip. The second shows what I think is a damaged leg on the chip, if you look at the third one from the left you should be able to see it ...... 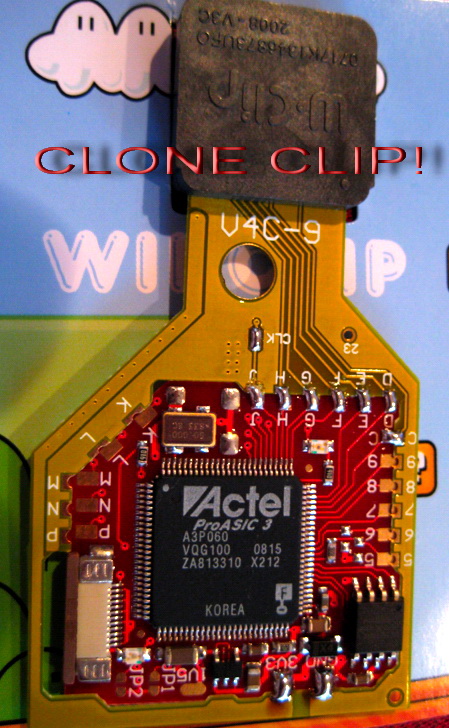 Here is one REAL case from Tom:

...... I did a quick check after I opened the package and from a quick glance, things seemed ok initially....... Now that I had a second look at the font in daylight, it turns out to be the fake font '1'. Fu*k, excuse me....well what I did this morning, before I read your mail. I soldered the F-wire and the jumper for PAL ......

...... Because, when this morning I saw the the drive-chip shows GC2 D2C. Now I put on the clip and after I turn on Wii, after red light, there comes the green light, but, the DVD-drive does not spin, does not eject...nothing. By the way, after having used the Wii-menu for some minutes, or the screen turns black or gives the error-message to eject the disk and turn of Wii ......

...... Do you suggest for me to unsolder and send back the Wii-clip. My solder-skills are so bad, that I do not dare to solder my Wasabi permanently to the board ......

Here is one REAL case from Evan: 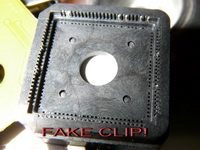 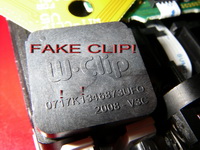 ...... Thank you. From the pictures does it appear to be a fake? I did hook it up and attached point F and I just get a red light and the drive does not spin up, I am thinking its the fake clip. ......

Here is one REAL case from Edward:

...... I've just recently ordered 2 modchip and 2 wii-clip from xxxxxxxxxxxxxx.com. thanks god without pre-soldered option. I tried to fit the V4C-9 on to my chip and its bigger than the chip. so WTF is going on. The wasabi looks OK. I came back to wiiclip HP to check soldering instructions and then i saw exactly the same situation like mine (http://www.wii-clip.com/images/clone_clip_top.jpg) 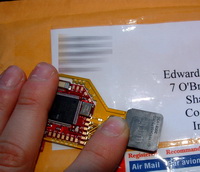 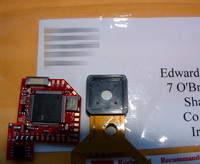 After i checked the fake or not fake page and exactly i have 2 fucking fake wii-clip.  So fuck it xxxxxxxxxxxxxx.com nice shiny homepage but fake stuff.
I would recommend to remove it from reseller list this shop. Please, before other people throw money out of the window.   Edward ......

Here is one REAL case from Mishka:

...... I‘ve recently bought Wii-Clip and Wasabi V2 from xxxxxxxxx.com and according to your pictures it appears that they have send me a fake clip. My wii drive doesn’t work when I attach it to the motherboard and it starts working again when I put it off ...... 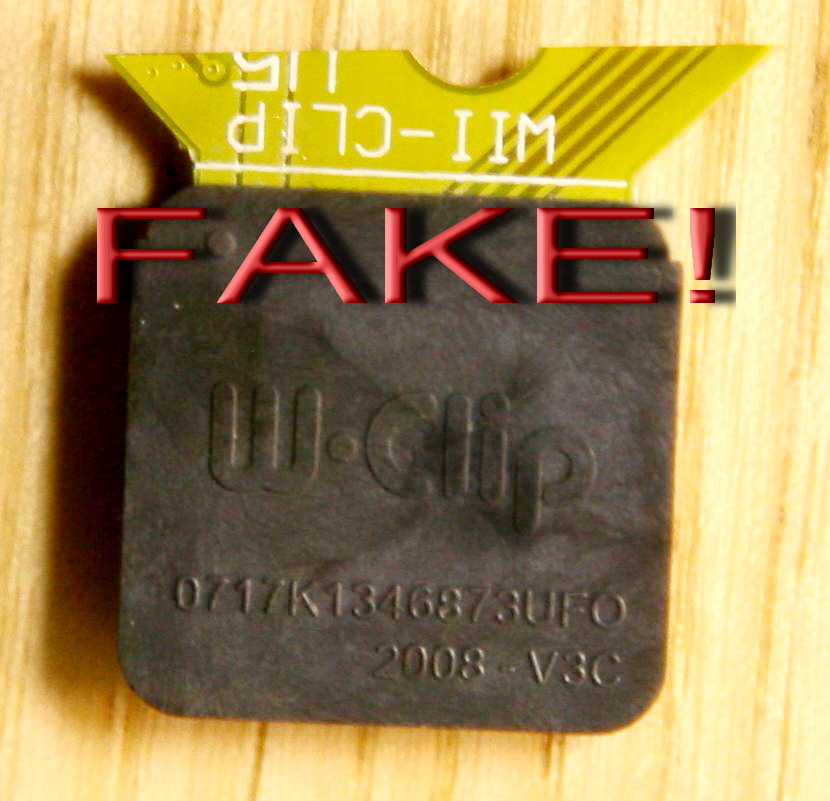 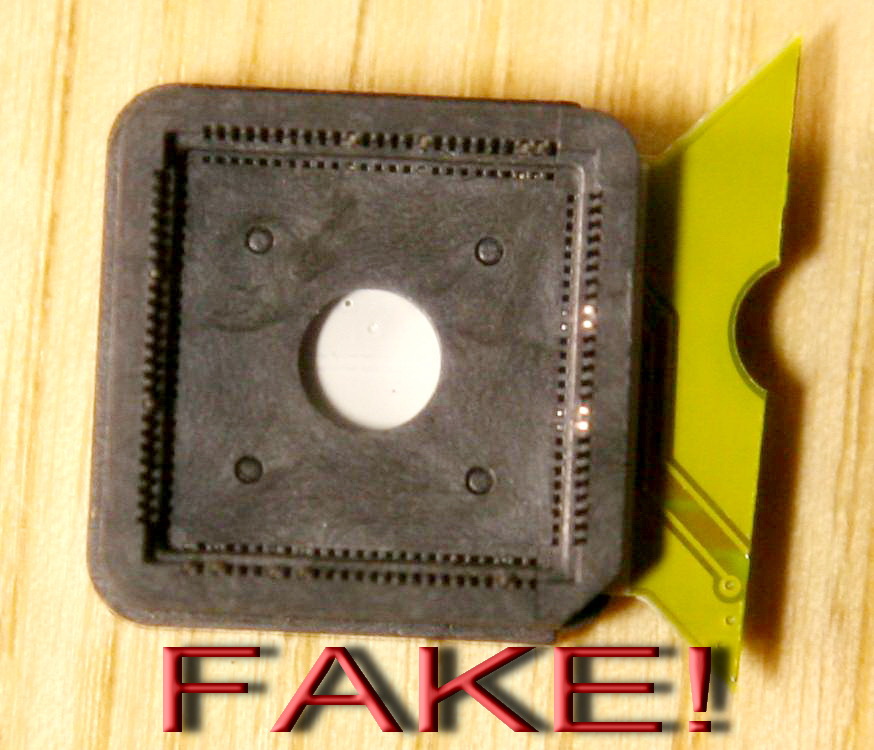 Here is one REAL case from Petr:

Hi, i just let you now, that i bought for sure clone wii clip, because when i found information on your website about wii clips, I checked differences between fake and original:
1. my clip has not number on the below
2. the 1 font is different
3. its dark - black color

I think that the modchip isnt right too, because there is something extra added.

I bought it from consolesource.com, I waited for it around two weeks, I have tried to call them 10 times, nobody answered it, i sent them 3 emails, nobody has sent me answer. Their services are really bad, it was my the worst experience. I will send them items back, and I hope that i will get my money back as soon as.

Please inform about this on your website, because i read that a lot of customers are thinking to buy something on consolesource.com.

Thank you so much.

I sent you photo of my modchip and wii clip - you can compare it.

If you need any more information, for example, the bill form consolesource - that i bought it there. Its not problem, just send me email and i will be cooperate with you to help other customers. 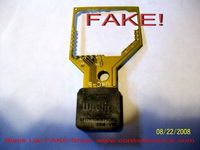 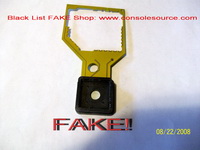 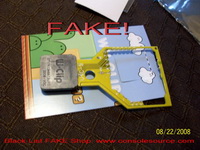 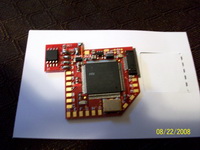 How to identify your WII-CLIP is ORIGINAL CLIP or FAKE CLIP? 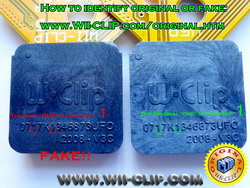 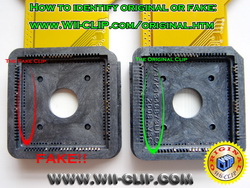 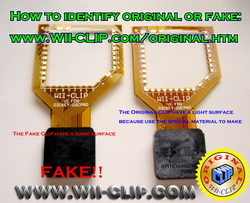 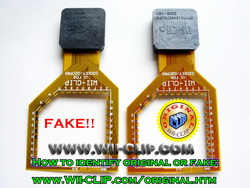 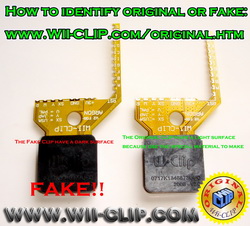 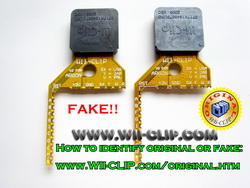 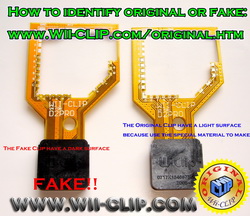 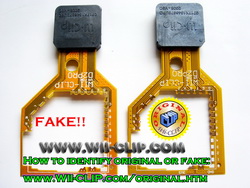 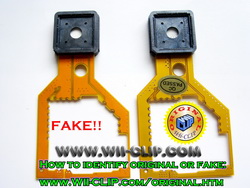 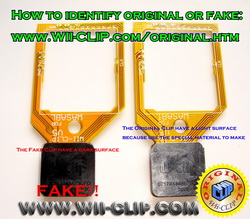 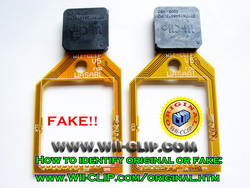 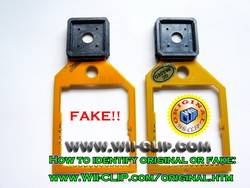